One noteworthy activity of the Club is the NOAAWIVAA Service Rifle Team. By participating in the Team, you will learn to shoot a rifle WELL. Even if you’re a so-so marksman now, we can make you an Annie Oakley. We have fun at team practices and going on the road to matches. Each season, we hold spring training for new shooters starting in late March.  We compete every month in unofficial training matches at T’s Corner and official NRA matches at Bridgeville, Delaware.  We field teams at the CMP Eastern Games in North Carolina and the State Championships in Quantico, the LantFlt/All-Navy matches at Dam Neck or Quantico and compete in the National Matches at Camp Perry Ohio in late July. We also have a very active Junior team (ages 14-20).

State law now forbids us to loan out complete rifles, but we assist Club members in obtaining AR-15 lowers.  Once a member has secured the lower through a local FFL dealer, Club members may check out our uppers to practice on their own between team meetings. These include service grade, medium grade, and match grade barrels.  Service grade rifle rental is $15 a month, match grade slightly more. You may also use your personally owned M1, M1A, or AR-15 to compete, if it meets the current Service Rifle rules. We also do 100-yard unofficial “NRA Rules” matches at T’s Corner once a month, starting in March, to get everyone used to the rules and positions. Vintage bolt action rifles are sometimes seen there as well!  See the Calendar for dates.  These matches include an hour of safety and position training before the match starts. We also often schedule team practice shoots at 200 and 300 yard locations before important matches.

Even if you start out using commercial or military surplus ammo, sooner or later you will want to start reloading, both to bring down cost, and because you can develop a load specifically tuned to your rifle. We schedule reloading and load development workshops as required to show you how to load, develop and test match ammunition for your rifle. We also occasionally coordinate bulk buys on reloading presses, ARs, primers, bullets, brass, and powder, to bring the cost down for everyone.

If you know anyone else who would like to be on the Team, please let him or her know about this activity. We especially want to reach out to women, Juniors, and 20-somethings, and if you know anyone who shot in a military or police rifle team in the past, let him or her know about us. Our Junior team is very active; check out our Facebook site at “NOAAWIVA Junior Rifle Team.”

For additional information about High Power Rifle, check out www.6mmbr.com/highpowerbasics.html.  After that check out the CMP website at www.thecmp.org. Lots of good stuff there including advice on wind reading, strategy, and how to order GI surplus rifles and ammo once you are a NOAAWIVA member.

The Team holds a sizeable library of books and DVDs about high power competition, precision reloading, and service rifles. Two good sites about reloading for the .223 are www.6mmbr.com/223Rem.html and www.njhighpower.com.If you’re new to this sport, the first order of business is to get your rifle ready (either your own or via the Club’s arrangements with local FFL dealers), become familiar with its operation, and sight it in for the ammo you’ll be using. You can buy the Team’s  HXP 30-06 ball, the Team’s .223, buy commercial match ammo, or reload your own. You will need about 100 rounds for a full 800-point match. If you reload, the Team has a chronograph you can check out to get velocity for your loads, but you don’t really need it; the come-ups are pretty standard for the fixed distances we shoot at. Other equipment you’ll eventually need are mat, scope, stand, extra magazines, shooting coat, and gloves. Most of these you need not buy new or right away; for example, a piece of used carpet will do fine as a mat for your first couple of matches, binoculars can substitute for a spotting scope, and snowmobile gloves or work gloves will do for a shooting glove, as long as they have a nonslip surface such as leather or rubber and some padding.  We also have mats, coats, mitts, stools, and scopes you can check out once you are a Club member – so you don’t actually need to BUY a lot of gear up front to get started. 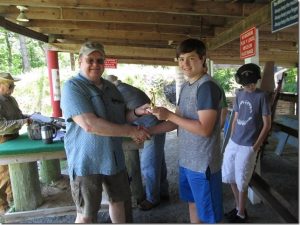 Rifle is a very popular sport for both men and women at American colleges and universities. Nearly a thousand universities and colleges award one or more scholarships to talented rifle shooters. They then compete in collegiate and intercollegiate matches and possibly also national championships, as well as ISU and Olympic competitions depending on their discipline. Here are some of the colleges with teams:

U of Alabama – Birmingham

U of Alaska – Fairbanks

U of Missouri – KC

U of Nevada – Reno

U of San Francisco

U of Sciences in Philadelphia

U of Tennessee – Martin

U of Texas – El Paso

U of Wisconsin – Oshkosh

For more general info take a look at these sites: